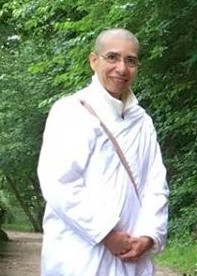 Anagarika Sabbamitta was born in Germany in 1959. While still a student she encountered Buddhism with Tibetan teachers first. She practised in this tradition for around 30 years as a lay practitioner with regular contacts to a small group in Alsace / France. This lineage of Tibetan Buddhism had a strong tradition of lay practitioners, so that the idea to go for monastic life didn’t occur to Sabbamitta, even if the Dhamma was her main interest in life.

At some point the Alsatian Dhamma group started studying suttas from the Pali canon next to what they learnt from the Tibetan Lamas. This broadened their understanding of the Dhamma and gave rise for Sabbamitta to meet practitioners and teachers of the Theravada tradition. Finally it was a metta meditation course taught by Bhante Sujato that opened her mind to embrace meditation more deeply, and also made ripen her wish to take up robes. Together with Ayya Vimala she became a founding member of Samita ASBL.

In 2015 she gave up her professional work, and after living in different forest monasteries in Australia for some time she received the Anagarika precepts from Ayya Vimala on 11th March 2017.  She is currently living in Germany and working on a project to translate early Buddhist texts into German.

More information regarding her work you can find here (in German): https://dhammaregen.github.io/dhammaregen/