Christmas 1944. The start of the coldest winter in history in the Ardennes. The ground is frozen and snow covers the landscape. A lot more is still to come. It looks almost idyllic, if it were not for the harsh reality that lies underneath. The soldiers of the 347th Infantery Regiment, 87th Infantery Division close in on the small village of Bonnerue, about 1 kilometer from where now Tilorien Monastery is situated. The village is an important link on the german supply routes and they have to capture it.

They started their march a month ago but the hardest part of the journey is yet to come. They will have to face fierce fighting in the frozen landscape, with frozen toes and gangrene. They will sleep in foxholes under the snow, which are hard to dig because the ground is frozen solid. They do not know where they are, and death can hide behind every tree, around every corner. The Battle of the Bulge has just begun. 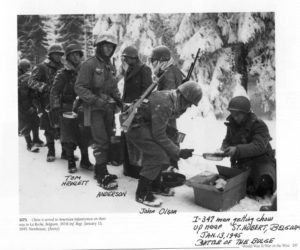 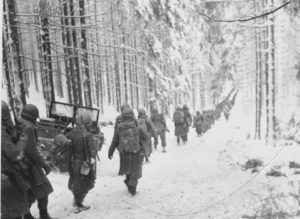 Last month ago, myself and Anagarika Sabbamitta went for a walk in the forests around Tilorien Monastery on a lovely sunny autumn day. The sun makes the colored leaves shine like gold. The path becomes very overgrown, and then ends but we press on. A little further under the trees we find a scene that leaves little to the imagination of what happened here. Between the trees, about one kilometer from the road, we find three drab olive cars, the type the US army used for transporting it’s officers. The drab olive colour provided some camouflage, while the thick sand-tires made it able to drive off-road. The first one must have taken a direct hit by a mortar or tank-shelling. The only recognizable parts are an axle and what looks like the back of a jeep at the bottom of a crater. The second one has been thrown up in the air, overturned and landed on another. The third stands with it’s doors wide open. And all around are impact-craters. This was a direct assault, with the intent to kill. Did any of them survive? Will we ever know? We stop and chant the Metta Sutta. 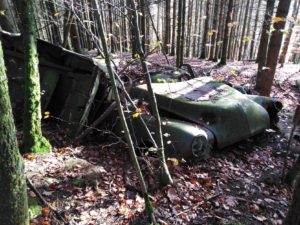 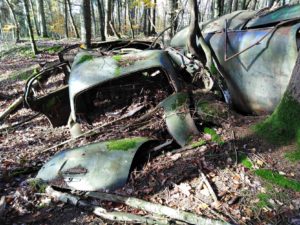 A silent reminder of the war of which it was said: ‘this should never happen again’, 75 years on. We have had peace in these lands for longer than we ever had before. A peace that has given us a previously unknown prosperity. But that has also given us a huge rise in population and an ever increasing demand for natural resources. It has led to irrepairable damage to our planet’s ecosystems and has overtipped nature’s natural balance. It has set a process in motion that cannot be stopped. The people who have lived through the war have nearly died out and the memory is fading. WWII has found it’s place in the history books between other bloody battles in our past. The political landscape has become more and more polarized with anger on both sides. This too, we have seen before. And with that, the circle slowly closes and our cars are no longer just a silent reminder of a past long gone, but have become a grim warning for our future.

But in the devastation of the Battle of the Bulge, we can also find stories of love and tolerance, of lessons to be learned.

While the population is sheltering in basements, without heating and hardly any food, a young school teacher bandages the arm of a German soldier. He has been shot by an American and is now his prisoner. While on their way to the American headquarters where all prisoners are assembled, the pair has to shelter in this basement because the heavy bombings make it impossible to progress further. The other occupants of the basement are not happy about the German soldier in their midst and clearly voice their objections. The school teacher gives them a warm cup of thin potato soup. The German takes it into his shaking hands, and cries with gratitude. This teacher, a member of the resistence, his enemy, shows him love and care. He has not had anything warm to eat for weeks. If the situation had been different, if he had captured her instead, he would have been under orders to execute her.

But all she sees is a human being who is just as much a victim of circumstances as she is and who needs love and care. She has to courage to look beyond appearences and see the true person behind and give him that unconditional love.

As the days progress, the occupants of the basement begin to get more used to his presence. 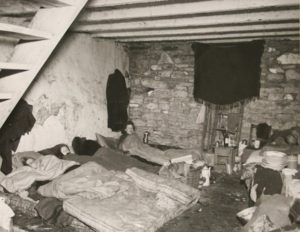 Civilians sheltering in basement in Houffalize

A 13-year-old boy sits in the corner, playing a guitar. He only knows one tune to play and keeps playing it to keep himself sane. He has lost his parents. His father has been executed by german soldiers because they found a radio in the church spire of their village. The German soldier goes over to him and although they do not speak a common language, he teaches the child some new songs, helps him to find a little bit of happiness. And the music also lifts up the spirits of the other people in the shelter, despite their uncertain fate.

It is only the unconditional love and compassion of one school teacher that has melted their hearts. Through her acts of kindness people started to see each other, not as enemies, but as people. This love takes a lot of courage, but it is so powerful.

But the story does not end here. After the war, the school teacher, the two soldiers and the boy meet up again, and write down their story. And the story spreads and after 75 years is still very much alive; it reminds us of the importance of love, especially under the most trying of circumstances.

I remember this story as we look down over the impact-craters, now covered with a thick carpet of autumn leaves. All the people involved in the drama that played here 75 years ago, are now dead. But the cars remain as a silent reminder that everything passes, but also as a sign of hope, of love and courage. That is where the real fight lies. 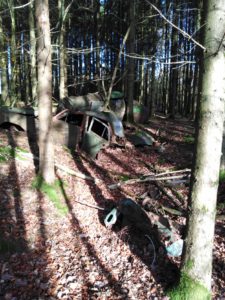