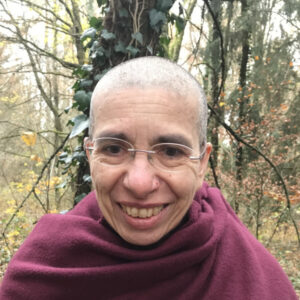 Sabbamitta Silashin first encountered Buddhism with Tibetan teachers in her mid-twenties. Later, after discovering the Suttas, she became interested in Early Buddhism. For about thirty years she practiced Dhamma with a group of friends while working as a doctor and psychotherapist. She received important inspiration from teachers of the Tibetan Drukpa Kagyu lineage and later on from Ajahn Brahm and Bhante Sujato.

After extended stays in monasteries of the Thai forest tradition she took Anagarika ordination with Vimala Bhikkhuni in 2017 and helped with the establishment of Tilorien Monastery in Belgium, while at the same time supporting her parents. On Nov 20, 2021 she was ordained as a Silashin according to Burmese tradition by Sayadaw Kusalasami, encouraged and supported by her mentor, Santacitta Bhikkhuni.

Sabbamitta Silashin is living with her father. Currently she is working on German translations of texts of the Pali canon and is part of the core team of Voice.suttacentral.net, a text-to-speech application for listening to the Suttas.