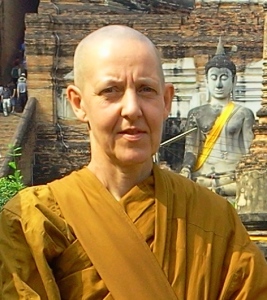 Ayya Mudita was born in 1962 in the GDR and has been a Buddhist Nun in the Theravada tradition since 2000.

She received her higher ordination as a Bhikkhunī in 2004 in Los Angeles. She has spent eight years in monasteries in Bayern, Germany.

For the deepening of her studies and meditation, she practiced in Sri Lanka, India and Taiwan. From 2010 until 2013 she trained mostly in Thailand.

Since the end of November 2015, she has lived again as a nun with Samanerī rules and leads the Saraṇa Dhamma Treffpunkt in Bad Pyrmont, Germany.