The Art of Fighting

First published 2014 in the magazine “Gegenwart” of the German Association for the Blind and Visually Disabled.

Being blind, I feel like I live in a vacuum between two worlds. The one I cannot let go of completely, the other is still a little strange to me. I’m never sure if my superficial knowledge is enough to understand the rules of both worlds and find my place in them.

The secrets and treasures of perception without seeing remained hidden to me for a long time. When I went blind at the age of twenty from a congenital and long time undiscovered glaukoma I was too busy finding my way in an environment organized almost exclusively by visual features. That the word “blind” is often reserved for a negative meaning intensified my already uneasy feelings in this in-between world. One speaks of “Blindgänger” (unexploded bomb), “blindly”, “blind to shortcomings”, “blind love”, and “blind anger”. This list could be continued forever. For many years, I invested a lot of creativity to hide my extreme vision impairment. I accepted that by doing so I denied part of my identity, turning “two blind eyes”. Since my early thirties however, I cannot move around alone any more without a cane or a guide dog even in a familiar environment, so the cheating has come to an end.

Initially it was difficult for me to deal with the curious and often intrusive questions of passers-by. How do I preserve my privacy without being abrasive? And what do I say when my assistant is asked what I would like to drink?

The Chinese martial art Wing Tsun which I have been learning for 21 years has offered me much inspiration. Wing Tsun is not just about giving people a blow, but there is a not unimportant mental level. In the Chinese script, the same character is used for crisis and opportunity. Behind this lies the philosophy to direct the awareness towards what is working without crushing the grief over what doesn’t work anymore. For not acting out our grief over a loss only means we use another form of suppression.

With Wing Tsun I learned to maintain my ability to act, whether I am attacked verbally or physically, condescendingly or brutally. An attacker usually does not want to fight, but to win. He does not seek an opponent in me but a victim. With Wing Tsun blindness is absolutely an advantage as it is about very fast reactions to tactile stimuli. It was encouraging to me that the world’s highest-level masters are practicing with eyes blindfolded. I learned amazingly simple and very effective techniques. For 18 years, I have been a teacher myself, and have been awarded the honorific title Lady-Sifu and the fourth teacher’s degree which makes me one of the ten most recognized women in this style worldwide.

The philosophies of martial arts gave me a lot of freedom and ease. In my Wing Tsun schools, I am passing on this attitude. The point is to deal with the world as it is and not to hope that it will become the one we want. Because of my personal experience working with blind and visually impaired people of all ages is particularly close to my heart.

In situations that would have been frightening and embarrassing for me before I am now more confident, thanks to Wing Tsun. If today a passer-by brusquely points out to me and my companion that we parked our car in a space for the disabled, even before I could slip her guiding harness on my dog, I thank them for the hint and praise their vigilance.

Silvie Weisskircher (55) lives at a small horse farm in Saarland and is working, besides running her Wing Tsun schools, as a freelance artist and singing teacher. 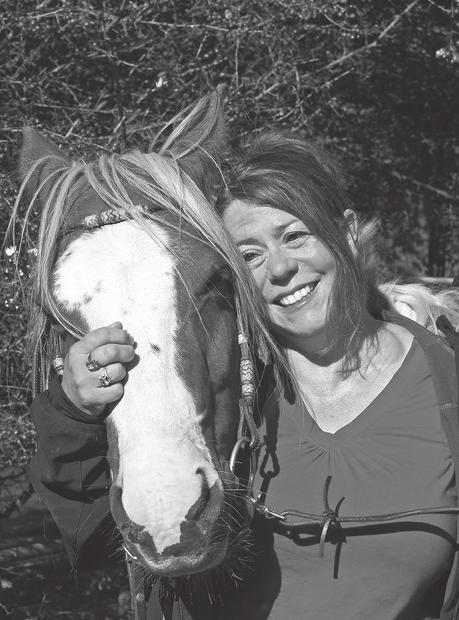 A picture: A middle-aged brunette woman is standing next to a horse, cuddling up to its big head. Radiant, she embraces the horse’s head, her ringed hand tenderly touches the beast’s white blaze.