You are very warmly invited to join Ayya Santacitta at the Tilorien iSangha (http://tilorien.org/en/isangha/) on Friday 12 June at 7pm CEST  (see here for other time zones) for a Dhamma Talk, meditation and Q&A. 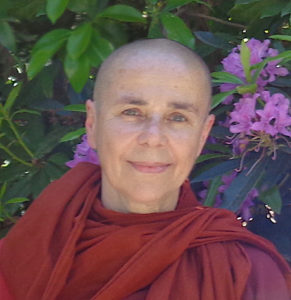 Santacitta Bhikkhuni was born in Austria and did her graduate studies in Cultural Anthropology, focusing on dance, theatre and ritual. She also worked in avant-garde dance theatre as a performer and costume designer. In 1988 she met Ajahn Buddhadasa in southern Thailand, who sparked her interest in Buddhist monastic life. She has trained as a nun in both the East and West since 1993, primarily in the lineage of Ajahn Chah, and has practiced meditation for over 30 years. Since 2002, she has also received teachings in the lineage of Dilgo Khyentse Rinpoche.

Santacitta Bhikkhuni co-founded Aloka Vihara Forest Monastery in 2009 and received Bhikkhuni Ordination in 2011. Since moving to the U.S., she has also greatly benefited from Bhikkhu Analayo’s teachings on Early Buddhism and from the guidance of Khenmo Konchog Nyima Drolma. She is particularly interested in creating sanctuary close to nature, living in community and bringing wisdom traditions to the environmental movement.