It is the morning before the US elections. I put my morning cup of tea down on a sturdy wooden crate next to me. The printing on the side of the crate reads:

This crate was parachuted out near the town of Gorinchem in the Netherlands at the end of the hungerwinter of 1945. It was found by a little boy, nearly 14 years old, who carried it home with his brother. His father had been arrested in September 1943, tortured and sent to a concentration camp, because he was a member of the resistence.
That little boy always kept that crate and later passed it on to his daughter, which is me. 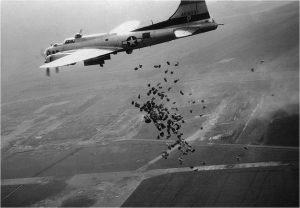 An Amerikaanse B-17 drops food supplies for the starving population during operation Chowhound in may 1945.

To me, this crate is a symbol of the kindness and compassion that the British and American people showed us here in Europe, where people were dying of hunger. They did not know the people here, there was no internet, no telephone. These were people on the other side of the world, who they had never met. It was America, that welcomed thousands of European refugees with open arms. And it was America, that initiated the Marshall Plan, which gave rise to a speedy economic recovery in Western European countries.

Back then, people said that this had been the war to end all wars. That this should never happen again. But memories fade and the people that lived through the war are dying out.
There is one thing we can learn from history and that is that humanity has never learned from history. With the forces of fear, greed, hatred and delusion on the rise again, and extremist parties gaining more ground all over the world, I cannot help but to compare it to pre-war Europe.
But each of us has a choice on how to react to the world we see around us. We can allow the fear to overwhelm us, we can react with hatred towards those who are different, or we can look inside our own hearts and find that kindness and compassion that shatters all fear and hatred. With the Dhamma as our guide, with meditation, we can face that fear and find the courage in ourselves to overcome the negative forces of Mara. 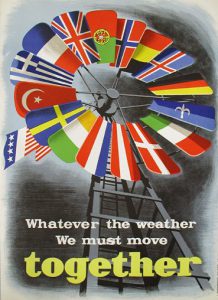