“The recipient determines the message”

My friend Anna mentions this so often: “The recipient determines the message!” – And sometimes she adds: “unfortunately”.

With this statement she refers to stories like this: “There is a person at my work who very often misinterprets the things I say. I say something kind, wishing to make a compliment, and (s)he takes it as an offence or insult. But that’s outside my control; there’s nothing I can do about it. The recipient determines the message.”

The other day Anna told me the following: “I was chatting with Eva and we spoke about my father-in-law. Since his wife died my husband and me are having really a difficult time with him. He makes us do many things he is actually still able to do himself, and he is constantly complaining about not getting enough attention: ‘You go for a walk with the dog for an hour, and have only half an hour time to spend with me; that’s how little I am worth to you!’ If we knew that he is developing dementia it would be easier to accept these things. But we think he’s just stubborn. This kind of behavior is hurtful to us.

‘Why?’, asked Eva, ‘why do you have to feel hurt? You are the recipient here’—how often must she have heard this from me?—‘and you are the one who determines the message!’ Right she is; I didn’t look at it this way. What a relief!”

That’s how Anna learned to apply her own saying in a wider range.

There is this story from the time of the Buddha: A brahmin from an influential family called Bharadvaja had become a disciple of the Buddha, and had actually ordained as a monk. Because of that one of his relatives whose name was “the abusive” became very angry and went to the Buddha in order to abuse him violently. The Buddha’s response to this “gift” was not to accept it.

“Are there relatives, friends or colleagues of yours who come to visit you from time to time”, he asked his interlocutor, “and do you offer them some food and drinks on these occasions?”

“And if they don’t want these things, to whom do they belong?”

“The same with your abusive words: I don’t want them, they belong to you.”

The recipient determines the message! 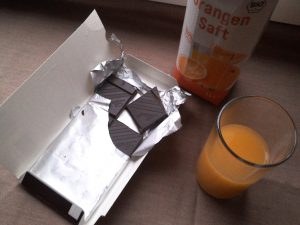